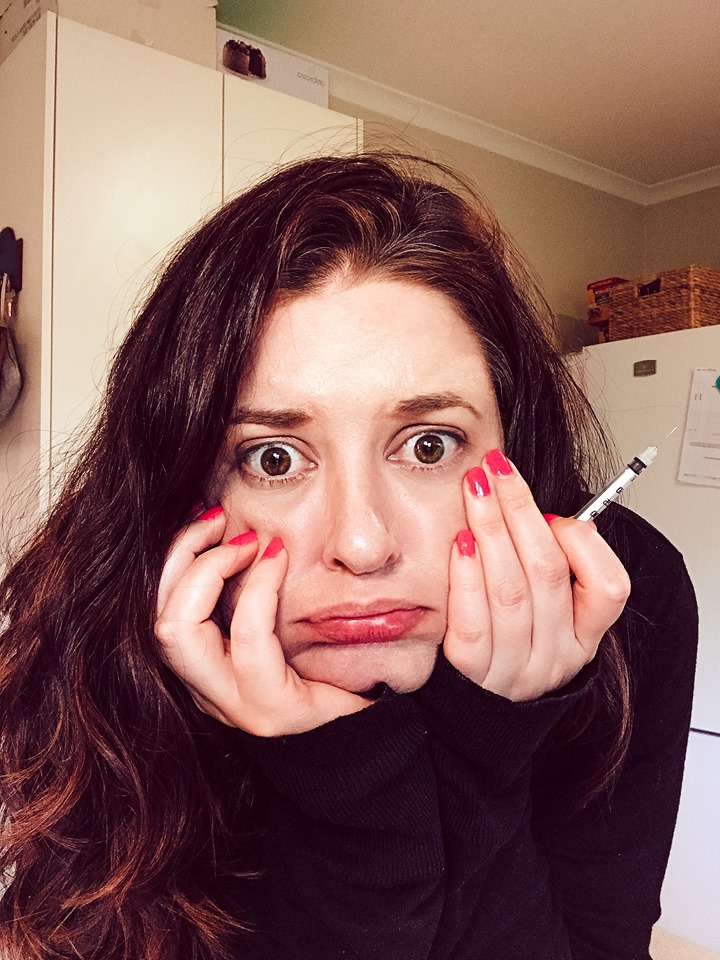 I’ve been awake since 4am! Grrrr! WHY?? I mean technically I got 7 hours sleep which wasn’t bad but struggle street again! Luckily, I’m working from home. Which I did from bed most of the day.

Acupuncture was good, I dozed off for a few minutes and it was incredible how much better I felt immediately.

I had a conversation with my Chinese Medicine practitioner which has left me a little anxious. She explained that she would prefer my TSH to be under 2.5. It was 4.40 and my specialist wanted it under 4 and then it came down to 3.45. My Chinese Medicine practitioner suggested I would be better off doing a frozen transfer when my thyroid was under control. While I want the cycle to work of course and want to do everything I can to make it work, I really don’t want to have to postpone transfer. There is conflicting information about it. Even the articles she sent me to support what she was telling me, were not actually supporting what she was telling me. One was about unexplained infertility – which I don’t have. I can get pregnant. There have been only three occasions in my life where I could’ve become pregnant (with the exception of course that contraception failed but that is rare). Of those three times, I got pregnant twice. My issue is staying pregnant and I’m pretty confident that now we are treating the Factor V Leiden, I will be much less likely to miscarry. The other article, while it said the official (USA) range in pregnancy was under 2.5, the actual study results said that it found no increased risk of miscarriage between 2.5-4.5. Of the articles I found myself, some suggested that it should be under 2.5; but most of these studies were for women who were already being treated with medication for hypothyroidism – suggesting without it their TSH would be much higher. And then there were others that suggested the guidelines needed to changed to increase the upper limit above 2.5. It suggested that we were over treating women who didn’t need it.

I have faith in both my specialist and my Chinese Medicine practitioner. And I don’t think either is ‘wrong’ necessarily; based on the research I’ve found there’s several camps. I’ve also read that everyone at the end of an assisted reproductive technology round will have a higher TSH – it’s just the nature of the beast because we’re messing with so many hormones. Normally I’d be ok with this, do my research, ask my questions and just decide – but hormones, you know!! I got myself in a bit of a panic and shot off an email to my fertility nurse asking to be re-tested again (even though it’s only been 2 weeks). My concern isn’t actually the 2.5-4 range. It’s that clearly my body reacts to hormones changes with thyroid changes. My TSH went up during the first few weeks of pregnancy but came down on its own with no issues. And now it’s up again following IVF treatments. My hope is that now I’ve treated my iron and on a bigger range of supplements that my TSH has been coming down. My worry is that the current IVF drugs are countering that and it’s above even the 4 my fertility specialist wants it to be under. So much to stress about!

On a positive while putting in the acupuncture needles she commented that you couldn’t even tell I was injecting several times a day! Go ME for good technique!!!

Oh my goodness though I’m hating my Menopur injection! Seriously, I’m sure i get a dodgy batch on needles. These ones appear to be blunt and just will not pierce the skin unless I push and that really hurts! They sting more and usually bleed a little after. Tonight’s was particularly bad!

Another good day. I slept perfectly!! Love acupuncture!! Headache later in the afternoon but nothing major. I did find myself wondering if this cycle is working. By this time in my other cycles I’ve been much more emotional (I think I’m more angry than emotional this cycle- everything’s pissing me off, I assume from the greater use of the decapeptyl). Also, by this time in my cycle I would often quickly become out of breath, not in an over stimulation way (because I’ve never had that) but it was just taking a greater toll. Praying that the acupuncture is really just that good! Scan and bloods tomorrow and I’m pretty excited and anxious.